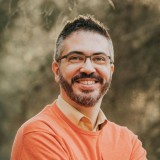 2 respuestas a «Interview of Ray Wenderlich founder of Razeware and administrator of the raywenderlich.com programming tutorials blog»